So You Found A…

The skunk is also known as a polecat. The two known species of skunk in Kansas: striped and spotted. The skunk weighs about the same as a domestic cat. Skunks are black and white, but there are some variations. It has a bushy tail marked with black and white rings. They have poor vision but possess excellent senses of smell and hearing. When threatened, skunk are known for spraying a foul, strong smelling secretion from their rear end, a tactic that is quite effective in discouraging would-be attackers. The spray, which can reach 10 feet away, can cause irritation and temporary blindness. The odor can last for days. Its major predators are coyotes, bobcats, and owls.

Skunks are omnivores and opportunistic feeders. The common skunk diet includes worms, rodents, and even small reptiles such as lizards, salamanders, frogs, snakes. They often hunt insects, insect larvae, poultry, eggs, and small mammals. They are also known to attack beehives to eat honeybees as their thick fur protects them from stings. They feed on garden vegetables, fruits, berries, grasses, and roots often digging small holes in the soil. In urban and suburban areas, skunks forage and eat from household garbage cans and leftover pet food. Less commonly, they are scavengers, feeding on the carcasses of birds and rodents.

The male skunk is called a buck, the female a doe, and the baby a kit. The birth of two to 10 kits usually takes place in May, seven to 10 weeks after mating. The female skunk digs a birth burrow to have the babies in. Kits are born blind and without any teeth, they are also unable to use their defensive spray at first.

Skunks are the prime rabies vector species in Kansas. If you see a skunk that wanders aimlessly, seems drunk, and appears disheveled, dirty, and slow, it might have rabies. Do NOT approach the skunk, and do NOT try to trap or corner the animal.  OWL does not care for adult skunks.

If you are bitten by a skunk, try to contain it. It can be euthanized and tested for rabies. The animal must be euthanized for rabies testing and the only way to diagnose rabies is by examination of the animal’s brain.  Humans that have been exposed have a 99% fatality rate if not treated quickly. It is best to avoid direct contact, and let professionals handle them. Tests are expensive, and treatments are painful.  Your county health department is responsible for having the animal in question tested.  Animal control should also be called and the skunk should be transported as soon as possible because of the health risks and difficulty of keeping them contained.  Wash the wound well.  Rabies is a neurovirus, and it must attach to a nerve to be viable. Copious cleaning and making the wound bleed to flush out saliva can be very beneficial. Seek medical treatment immediately and report the bite to your local health department as soon as possible.

NOTE:  Skunks can carry rabies without exhibiting any signs of the disease. In other words, they are unaffected, but are contagious to other susceptible animals. Because of this, their offspring can be born with the disease as well.

Some indications a skunk may have rabies are:

Caution should be taken whenever handling a baby skunk, no matter what age or how docile. Always wear gloves when handling baby skunks. Accidents can happen and even a non-aggressive nip that breaks the skin is a death sentence because animals must be tested even if they show no outward signs of rabies.

This is because the animal must be euthanized for testing since the only way to diagnose rabies is by examination of the animal’s brain.

Humans that have been exposed have a 99% fatality rate if not treated quickly. It is best to avoid direct contact, and let professionals handle them. Tests are expensive, and treatments are painful. Animals should be transported as soon as possible because of the health risks and difficulty of keeping them contained. Refer to the section Transport for more information.

Cats have mouths full of bacteria that can kill an animal in a short time. All animals caught by a cat need to be brought in for medication and rehabilitation, even if you can’t see wounds.

If a dog brings you an animal bring it in immediately.  Dogs have powerful jaws that can create crushing injuries.

If you notice any of these issues, call OWL as soon as possible:

If your dog gets sprayed by a skunk, try the following recipe:

Mix the ingredients together with your dog in the bathtub. Do NOT pre-rinse the dog. Apply solution to a dry, skunked dog. Put the stopper in the tub so that you can sponge on the mixture and soak the dog all the way through. Make sure that your dog does NOT drink any of the solution. If they do get a lick of the solution, they will begin vomiting, and you may need to consult your veterinarian if it does not resolve quickly. Do not get the solution in your dog’s eyes or ears, and do not attempt to store this solution for later use. The chemical reaction will cause the solution to react in a sealed bottle and the bottle will explode. It is possible that your dog will end up with some ‘highlights’ in their hair after this solution, but at least they won’t smell like a skunk!  Soak the dog in the solution for 3-5 minutes, then rinse with warm water. If needed, you can reapply multiple times.

Skunks will burrow under cement to make their home. This happens in spring or late fall. To evict a skunk, it’s important to wait until babies are be old enough to follow mom out at night. Watch from a window (or safe distance) to see where they live. When they leave (they’ll all be in a little line like ducks in a row), seal the entire area with wire mesh except for one opening for the installation of a one-way door. The wire mesh must be inserted under the ground at least four to six inches deep to prevent digging under. Then bend into an L-shape at a 90-degree angle away from the shed or driveway. The mesh should extend six to 12 inches out from the area. Secure the wire to the shed or concrete and install the one-way exclusion door, which can be purchased at  Tomahawk.

Excluder doors will allow for any babies trapped inside to get out safely. Sprinkle flour outside the one-way door and check for tracks every morning to monitor coming and going. After a week has passed, you can be sure no animals are left under the shed, and then you can fill in with cement, more wire, or whatever you prefer that will exclude them.

If you have skunks digging in your yard, you likely have grub worms. Skunks are attracted to areas under bird feeders where the loose seed falls. Install a plate below your feeders to catch falling seed before it hits the ground. Buy one at your local hardware store or make your own. Using a metal pizza pan, drill a hole in the center large enough for the pole of the feeder. Place the pan 18 – 24” under the bird feeder and it will catch falling seed. Clean regularly. Skunks will also eat cat and dog food, so if you are feeding strays or putting food out for wildlife, you’ll attract skunks. To exclude them, place food on picnic tables or higher, because skunks don’t climb.

The First Treatment for Shock or Injury: Warm, Dark, and Quiet

If you find a baby that is injured or truly orphaned, the most important thing you must do is to keep them warm and quiet.  OWL does not rehab adult skunks. Follow these protocols.

Put baby in a shoebox or other small container with several small air holes in the lid and a small non-terrycloth towel, fleece cloth, or t-shirt in the bottom. Tape the lid to keep secure.

If you have a heating pad, set to low and place the box half on/off the pad, so babies can move away from the heat if they need to. OR

You can also fill a sock or knee-high pantyhose with uncooked dry rice. Microwave the rice-filled sock for 30 to 60 seconds. This heat source will last about 20 to 30 minutes. Place the rice sock in the container under the towel, and place the baby on or near it, but not directly in contact with the rice sock. OR

Fill a Ziploc bag with warm (not hot) water, put it inside another Ziploc bag, and place under the towel next to the baby. The double bag guards against leaks and prevents the animal from getting wet and chilled.

Do not attempt to feed or give them anything to drink. Keeping the baby warm is more important than feeding it. 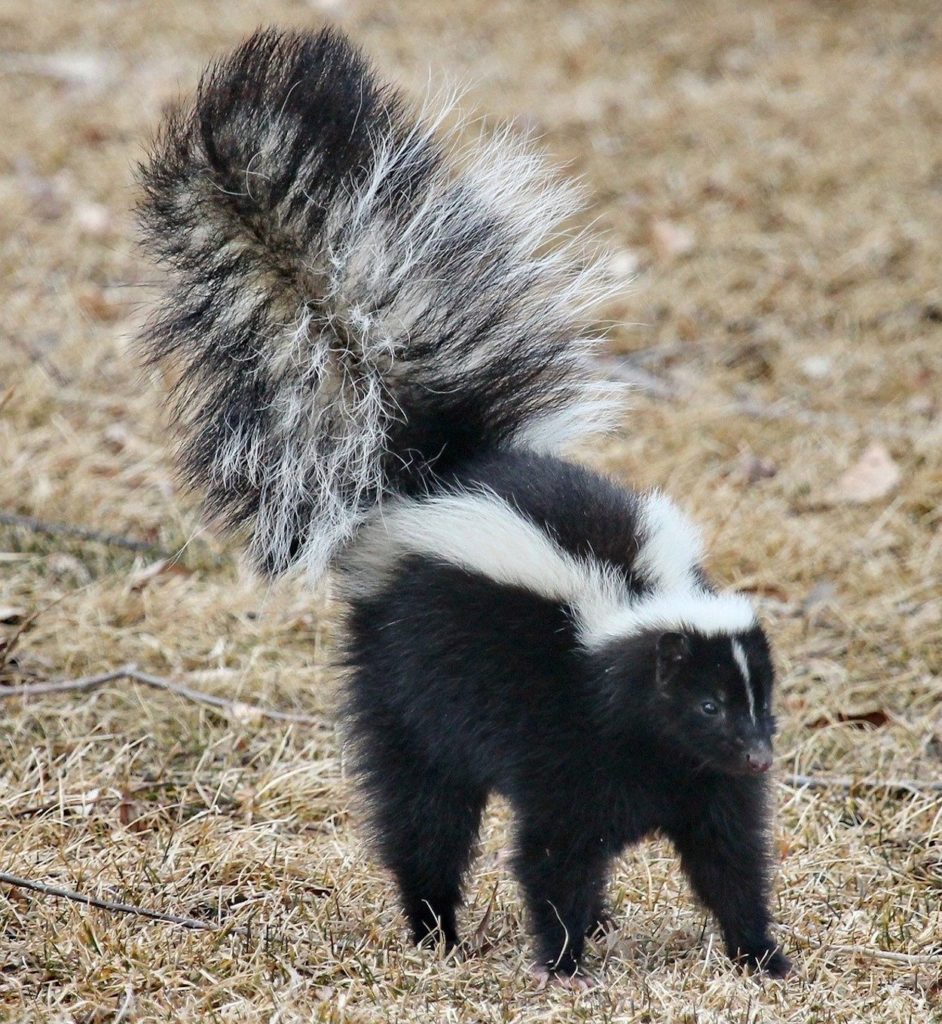 Caught / Trapped Skunks & How to Release 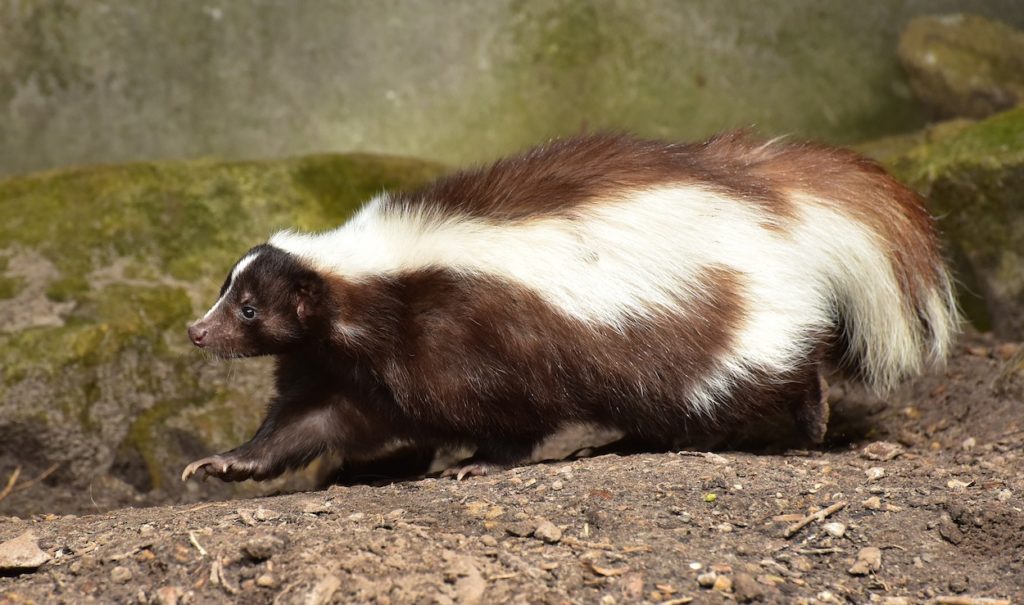